The
Fourth Invited Workshop and Open Symposium on Services System Sciences. Have
been held on March 6,7, 8,2011 at Tokyo Institute of Technology. The list of
participants for this workshop are Prof Steven Vargo from University of Hawaii,
Gery Metcalf from Inter Connections, LLC , David Ing from IBM as Business Architect, Jennifer Wilby from
Hull University, Louis Freund from San Jose State of University, Marja Toivonen
from VVT Technical Research Centre Finlandia, Collin Harrison from IBM US, Sew
Bun Foong from IBM Singapore, Mary Edson from Saybrook University, Hiro Matsushita,
Yuriko Sawatani from JAIST, Mayumi Itakura, Katsushi Yamashita, Kazuyoshi
Hidaka, Hiroshi Deguchi from Titech, Takao Terano from Titech and Kyoichi
Kijima from Titech as a host and organizer for this program. 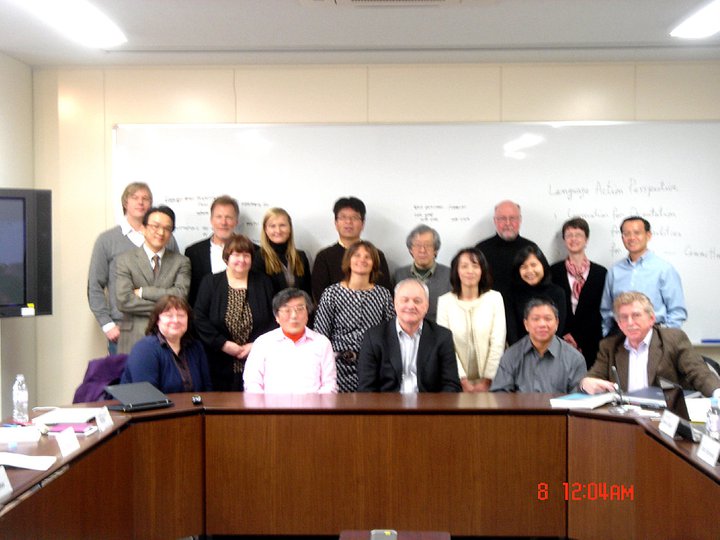 On the first day, 6 March 2011, there are presenters from IBM US.
Colin gave the presentation about Urban system are the composition of services
and capacities derived from monitor models, model optimize, monitor model,
optimize respond, and model optimize.

The next presenter is Sew Bun Fung from IBM Singapore, he gave a
talk about smarter city, LIVE Singapore. Smart is doing something better and it
needs a cross interdisciplinary disciplines. To define the smart level of city
is using a matrix to define it.

The third presenter is Mayumi Itakura. She explain about the
smarter planet that is thinking and acting in a new ways to make the system
more efficient, productive and responsive.

The next presenter is one of famous professor from Hawaii
University, Prof Steve Vargo. He gave the presentation about service dominant
logic as a new framework in the service system. The concept of service is term
in define the benefit in each interaction. The main point is co-create the
value, it means that value is always co-created

David Ing is our facilitator in this workshop. According to him
System Science bring the bridge between science and social science.

On the second day, 7 March, the presenters are Marja Toivonen,
Hiroshi Deguchi, Gery Metcalf, Kyoichi Kijima, Yuriko Sawatani. The first presenter
is Marja Toivonen. She would like to bring deep knowledge from different perspective;
the second presenter is Hiroshi Deguchi. He is a professor of Agent Based
modeling and Simulation who develops SOARS. According to him, complex system
with decision making to clarify there is no boundary from the specialties. There
are 3 languages:

3.
Social simulation (Agent Based)
–> it’s a bridge between mathematic and natural language. If we describe
something about world –> we must use the language, what kind of methodology
that we use to describe the world

2.
What kind of language to
construct? Service science as system science from the theoretical,
mathematical, application point of view.

The third presenter is Gery Metcalf who gives statement that service
science needs a foundation in system science.

–
Understanding the viewpoint of
user. The starting point: multiple roles of service sciences. Customers are in
specific relationship. There are relationship between provider and the
customer. Multiples role of service have been raise to discussion. The
methodologies are narrative methodology by gathering the user story of their
lives or imagines experiences regarding a specific service and service design
tools: different kind of artistic tools as well as drama methods (socio drama)
can be used to concretize services.

he next presentation is from Hiroshi Deguchi about Innovation
design. Professor Deguchi is one of famous professor for social simulation. He gave
a talk about platform concept. According to him, platform type is many stakeholders,
there is interaction.

The other Presentation is from Louis Freund about the quality
control in co-production. The research area is the impact of customers
performance variation, co-production implies that outcome of service event also
must consider the customers performance. There are many aspect to customer
performance including: – performance to script

The next presentation from Gary Metcalf about Service Interaction.

Human interaction, there are a relationship (context) between
agent 1 and 2. There are trust, empathy, altruism, autonomy and power. When you
look Partnership relationship

Presentation from IBM Japan, Hidaka Sensei. According to him, service
is clearly described on the System, that is explicit description for IT
services, communication between user and cloud portal and automated,
provisioning and also communicating.

Service is social value co creation process. There are three layer
of service system science that is Concept, logic or paradigm; SDL and unified
service theory, Models and theory and management and support (application of
model). In his model there are process model of value co-creation of service
system and a structural model of value co creation of services system using two
sided platform;

Shopping mall try to orchestrate the customer to create the new
value, platform is just facilitating the real stakeholder.

The next one is Presentation from Yuriko Sawatani. According to
her explanation, SD logic of service research centers value co-creation gives
the synthesis model of service research. Service innovative orientation to
facilitate innovation through value co creation requires the transformation of
both organizations. The management system of R and D needs to transform to
accept diverse research themes, and facilitate multidisciplinary research
activities.